Across Europe, preparations were made in the summer of 1992 for festivals around the eightieth birthday of John Cage. When Cage died in August, these festivals became memorial concerts. In Groningen, I was involved in the festival But What About the Noise ...?  that took place between 10 and 15 September. In addition to works by Cage, there were memorable concerts by David Tudor, Dieter Schnebel and Michael Pugliese, and the festival included the first retrospective exhibition of artwork by Cage in the Netherlands at the Groningen Art Centre. One element in the programming was the contribution of four Dutch composers who were invited to write short tributes for the concerts.

I decided (just like Cage did in his String Quartet in four parts) to write a group of works around the four seasons, linked to topics that marked Cage's work: FallDance for percussion, SpringVoice for choir, SummerTime for ensemble and WinterSilence for chamber orchestra (using the same instrumentation as Cage did in his 1947 orchestral version of The Seasons).

The starting point for my orchestral composition was Cage's comment "Silence can often be very loud." My work is an accumulation of in total seven sound structures followed by a successive removal of these in a different order, lasting four minutes and thirty-three seconds. It begins with sounds in percussion and strings, using open strings (C, A, G, and E strings obviously) followed by combinations of glissandi, harmonics and different tone aggregates leading to modulated chords in the middle of the piece, after which, one by one, elements disappear until only the resonances of the piano remain.

2 clarinets in B flat 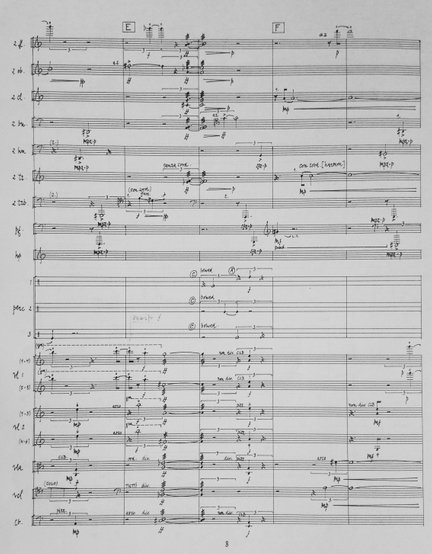 Page 8 of the score

“In these five-minute works, it mainly came down to many long tone combinations, sound fields combined with short events for single instruments or groups. None of the pieces made a distinct impression by itself or sequentially, although the Xenakis-like sounds in "WinterSilence" by Van Emmerik stood out because of their activity (...). 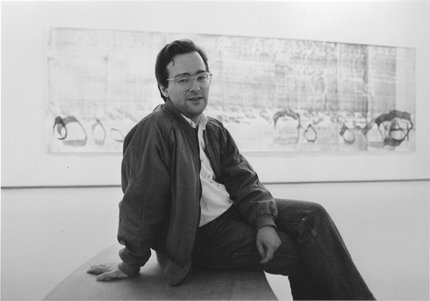 Ivo van Emmerik at the John Cage exhibition at the Art Centre Groningen, which was held on his initiative from September 11-November 1, 1992