Although text nor language in any form play a part in this work, I imagine the music as a composition for five characters that alternate or interrupt each other with shorter or longer monologues.

Each character has its own disposition, one somewhat heavy and mechanic, another strict and measured, a third hectic and transitory, a fourth gloomy and threatening, and a fifth lyrical and lively.

Musically, these characters are never expressed by solos, but always by the entire ensemble, so as to demonstrate various aspect of their personalities and to give them ‘depth’. Nevertheless, my protagonists are individuals, they don’t react to each other and sing their songs without accompaniment.

A cappella was commissioned by the Fund for the Creation of Music and written for the Ives Ensemble.

clarinet in B flat, 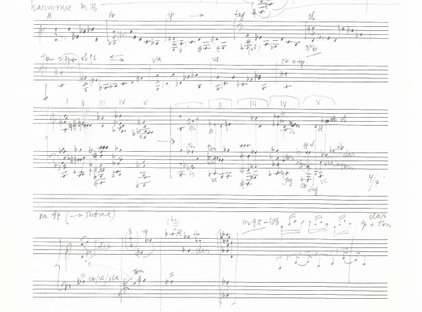 “His refined palette with short, repeated motifs had gained a surprising lightness in 'A Cappella': a serious walk with sea views, interspersed with skipping steps and illuminations in the ensemble. A meeting between characters, is how Van Emmerik described his nicely balanced work in smooth episodes in which the soloists shadowed and interrupted each other.”