Als een gelaat van zand bij de grens der zee is a work without beginning or end. You can imagine this cd-rom to be a globe you are walking on, looking for the countless connections between the world surrounding us and the means we have to describe her. You hear texts from our own time mixed with those written thousands of years ago, you hear sounds from a city or from the sea, you can see a mountain landscape or desert sand.

On this cd-rom, comments by the French philosopher Michel Foucault are being confronted with different texts of other writers, the Ten Thunderclaps from James Joyce's novel 'Finnegans Wake' running through it like a continuous thread. These thunderclaps (one-hundred-letter "words", hiding words from many different languages) ring in a new phase in history each time.

Point of departure was Foucault's remark that we "speak to survive"; we tell each other stories to ward off our fear of death. Foucault predicts that man will perish in the end in a constantly increasing and independently growing stream of information and words, man will disappear "like a face of sand at the edge of the sea".

James Joyce said the same thing in another way:"Talk save us"; thousands of years earlier Homer described how his hero Odysseus was tempted by the seductive song of the sirens. They claim "to know everything that happens on this prosperous earth", but do not tell that Odysseus would have to pay for this knowledge with his life.

In the work of the French writer Raymond Roussel no man can be found anymore and everything is subordinate to the rules of his wordgames.

These texts come from all sides, causing a soundscape. Landscapes can also be seen and heard, be it natural (a wood, the sea) or civilized (the city, a house). The musical fragments also represent a journey through different times and cultures: you can listen to a range of instruments, from mbira (African thumb piano) to electric guitar.

In the course of the years, this work threatened to be lost because the medium cd-rom was outdated and did not work on newer operating systems. In 2008, I therefore decided to make a new version in order to retain something of the work. This resulted in the radio play Talk save us!

The main difference between the new and the old version was the question of form: the cd-rom has an open form and is therefore timeless and has a process-oriented approach, while in a closed structure, time plays a much larger role and the cyclical aspect is given greater emphasis. The closed structure may seem conventional, but is still a complex of layers that stand on their own and must be connected by the listener;

What becomes more obvious in this version is that the texts are spoken by people in an ascending phase of life, the musical pieces evolve from quasi primitive to quasi civilized, (played on ditto instruments: from African mbira to electric guitar), and the ambient sounds change from rural to urban, and ultimately towards the sea. 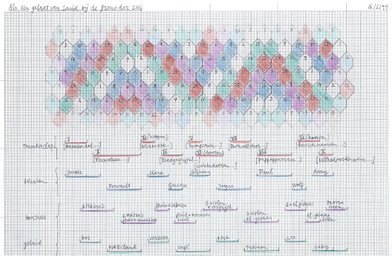 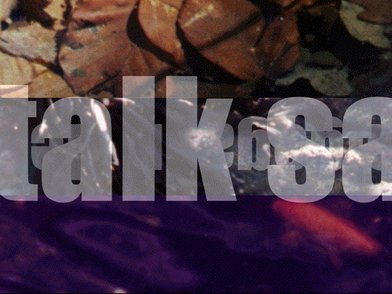 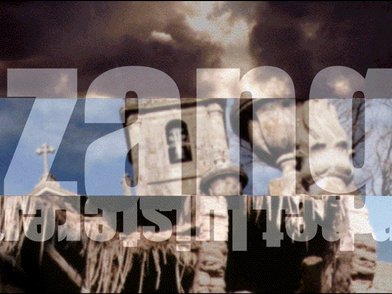 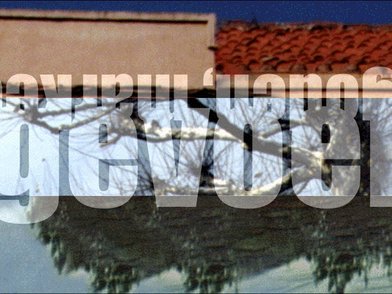 (reconstructed) screenshots from the cd-rom

From a preview article in the Volkskrant of 19 February 1999 of the concert with new cd-roms by Luc Ferrari, Walter Zimmermann and Ivo van Emmerik:

"It is a true bombardment of images, voices and sounds that the viewer in Als een gelaat van zand bij de grens der zee gets over him. Voices are mixed up, texts roll along, images change in a surreal way (we see for example the sea above the sky). (...)

The images of the sea, the Spanish inlands, green hills and skyscrapers symbolize the globe, Van Emmerik and Derks explain upon request. A frequently used metaphor for the cd-rom is a house with several rooms. This cd-rom, says Abel Derks, is like a house inside-out. An abstracted landscape in which you can wander endlessly." 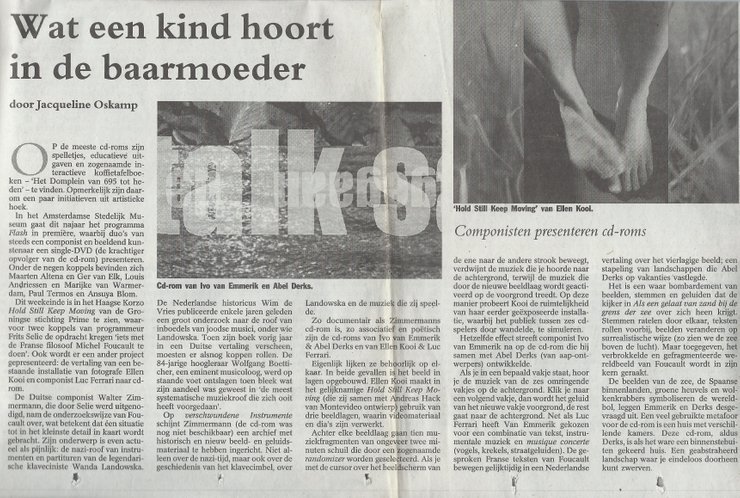