Everything that exists must be somewhere, according to Aristotle, so “place” is a fundamental category in our existence. Our sense of place is an important part of our experiences. The pieces that make up this series highlight these connections to ‘place’ in different ways, without ever naming a specific place.

The first composition in the series was called m2. This title refers to the small space of a living room concert for which it was intended. The four sections represent the four walls with repetitions as small niches and fermata as windows to the space outside. The first performance took place in the studio of the artist Michiel Knaven on a snowy December afternoon by recorder player Geesche Geddert, to whom this work is dedicated.

spaCe is a doubt is a song for mezzo-soprano and alto saxophone and an extension of m2. The text is a mesostichon (with the word SPACE as the central axis) derived from a reflection on space by Georges Perec in which a multitude of associations and ideas emerge about our relationship to places. Perec writes about the places that "might be points of reference" but is concerned that "time is going to wear them away" and concludes that places can only survive by meticulously describing them. spAce is a doubt was first performed in a small café by Berber Vis with Jos Baggermans on saxophone.

a fEw signs (written for Jelle Beckers) consists of twenty fragments in four parts that can be read like a poem: with short silences between the individual lines. It is also derived from m2, and like m2, the four sections represent the four walls of an interior space. Within these four sections, however, the space is viewed from different perspectives, so that it is always shown in a different light. They are the traces with which a faded place can be reconstructed.

Each of the twelve pieces from scrAps from a traCe (written for Tamara Laverman and Hanke Scheffer)  represents an aspect of places that connect us with the world. They are places where, for example, our origin lies, but also those we depart to, in search of untouched places or the places in relation to which we determine our direction.

But our environment is fragile and “space is a doubt,” according to Georges Perec. The traces that can be found, help us to mark and describe the places we want to preserve.

In connection to music we often talk about time, but rarely about place. Plato used the term “chora” for the place where abstract concepts were cast into transient, perceptable forms. In a sense, this is also a metaphor for music: a place where ideas take on an ephemeral form.

In Places, this materialization emerges in the alternation of four different themes in the fourteen sections that make up the piece. In the sections called Lines, the melodies of the first piece in the series, m2, are given a new counterpoint, placing them in a different light. The other sections, entitled Clouds, Circles and Colours, are more or less articulated manifestations of the same underlying basic material. The indeterminacy of some passages fits the "logic of the ambiguous" with which Plato's concept of "chora" is interpreted by philosophers. 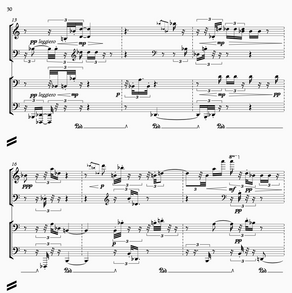 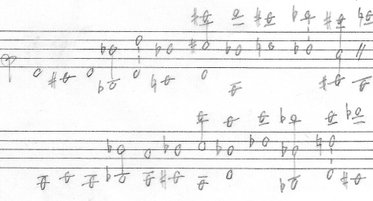 Sketch for attiC (#5 of scrAps from a traCe)

Works in the series: 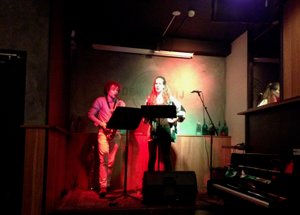