Intérieur was written at the request of the Nieuw Ensemble between August and October 1985. This composition is the final part of a series of three works that represent in different ways Proust's cycle In search of lost time: the concepts of time and space play a central role in this work. One could almost speak of two extraordinary characters. Intérieur is in a sense a translation of Proust's book. I made no attempt to capture the atmosphere of the story, but rather sought for a musical method in which time and space - in Proustian sense - could be the main parameters.

A second source of inspiration was formed by the work of a painter Jan Vermeer, who incidentally Proust greatly admired. In Vermeers interior scenes, which often focus on one moment, an immense space seems to unfold behind the windows and the suggestion is raised of “... a being that appeared only when in one of these identities between the present and the past it could be in, the only environment where it can live, enjoy the essence of things, that is to say outside of time.” (M. Proust, Le temps retrouvé)

1 december 1985, De IJsbreker Amsterdam, and the same day at the Muziekcentrum Vredenburg Utrecht, by the Nieuw Ensemble, David Porcelijn conducting 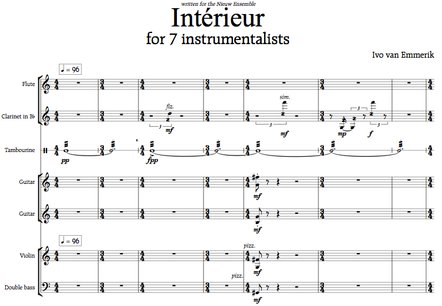 At the masterclass in Middelberg, July 4, 1986, Feldman listened to Intérieur and subsequently discussed it.

"I’m so glad that the first piece I hear is a good piece … Now, remember one of the last things I said about my own music, that it’s a fantasy of the kind of music I would like to write if I was a composer. So let me have a fantasy of the kind of music I would like you to write, if you… (...) Now, how do you talk about a piece that on its own terms is done very well? … how would you talk about something that’s done well? You know, you do get students that do things very well. Well, you do this very well. You know that remark…? Boulez once said something to me about John Cage, which was wonderful. He said, “I like John’s mind, but I don’t like what it thinks.” [Laughs] I could say this about this piece, “I like what you do, but I don’t like what you do at the same point.” That is: Where is the material? Where is the shape of a flute line, rather than a gesture? (...) Just try one thing in memory of our meeting: break the continuity of a line; interrupt, like Van Gogh, the symmetry of the linearity as it’s going. Because you’re working in a kind of syntax, response to activity. Just let it disappear." 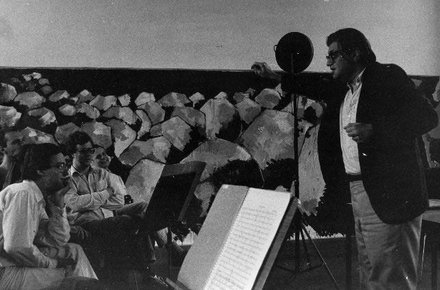