(…) but how many ever got to see the pure colour white?

The color of an opaque piece of glass could be said to be that in which, seen through it, a white light source appears.

As pure white, it appears through colourless glass.

In his Remarks on Colour Wittgenstein goes into the logics of color perception considering such notions as color, transparency, mixture and the like. Some associations with these notions formed the structural starting point for the composition of Polyphon gefasstes Weiss.

One could for instance connect "white" with "silence" or "transparency" with "resonance". This resulted in the use of a playing technique in which one or more keys of the piano are pressed down silently, thus taking the dampers from the strings, enabling them to resonate when other keys are played.

A water-colour by Paul Klee of 1930, from which this piano piece derives its title, was made in a similar way. On white paper, a small rectangle of which remains visible in the centre, coloured transparent surfaces are superimposed, bringing about a rhythmic spectrum of colours. The composition refers to Klee's water-colour in yet another way: it contains as many segments as the painting surfaces.

"Fittingly, this music from beyond music also goes beyond the piano, juxtaposing isolated notes picked out by the pianist from a celesta to set beside the resonating space of the piano." 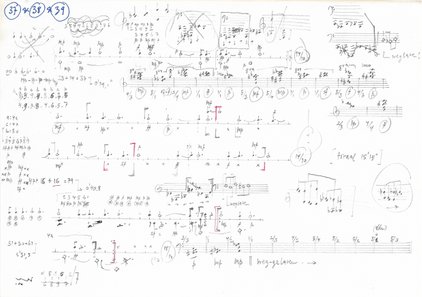 "Pianist john Snijders turned out to be completely at ease in the meditative spheres of Van Emmerik (...) What Snijders gets out of the piano is sound multiplied by concentration and with that he hit exactly the core of the program (...)"

"Polyphon gefasstes Weiss is characterized by transparency and soft colors that slowly merge into each other. (...) This produces surprising sounds at times, especially when the refined celesta bell sound mixes with it. A beautiful work, appropriately performed by Snijders (...)" 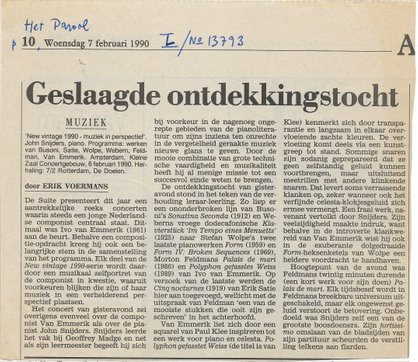