FOR TAPE RECORDINGS, SLIDES AND INSTRUMENTS

The landscape evocations with which Raymond Roussel begins each of the four poems in Nouvelles Impressions d'Afrique (1933) culminate in a long series of associations, puns, lists of examples and loose remarks. A written labyrinth ensues through which the reader can work his way, a colorful and often humorous literary procession, held together by parentheses: a single sentence interrupted by a comment in parentheses, which is also crossed by a further digression in double parentheses, and so on.

As early as 1938, J.B. Brunius presented a 'Roussel-reading machine' at the great surrealist exhibition in Paris. The Argentinian Juan Esteban Fassio built something similar in 1954, a kind of manually operated merry-go-round to quickly connect fragments that are far apart.

The stratification of music is pre-eminently suitable for descending into the cellars of this Rousselian text labyrinth and wandering there in the spaces that, according to Sjef Houppermans, “[are like] crowded rooms of certain museums from earlier times where (…) the most 'noble' works of art stand sisterly side by side with the most 'banal' (...) products of human ingenuity.”

The text fragments chosen for this composition together form a short train of thought about describing reality and the problems arising from it: a list of words that can have more than one meaning, how to draw conclusions from certain data, how one can then be misled, and how reality sometimes escapes the grasp of language.

The four parts of De Leesmachine are:

A: “How the significance of words change depending upon their context!”

C: “Proof that “to be deceived” is oft the same thing as “to read””

D: “It is often best to keep silent”

(English translations by Andrew Hugill (A, B and D) and Kenneth Koch (C)).

The first performance of De Leesmachine took place on 20 October 1994 in the Triadezaal of the Center for Visual Arts in Groningen during the Visual Minds Festival (organized by the Prime Foundation). The four parts were not presented separately, but stacked on top of each other in layers, with all the components involved (image, text, sound and music) being balanced by the overarching structure. The music on tape (as presented here) was supplemented by an instrumental ensemble and a series of slide projections on four screens made by Frank Zweers with fragments of text and original illustrations by Ellie van der Meer.

"A scarecrow for sparrows (a cross dressed in an old coat and an old hat). No people."

"A stone bench, without backrest, surrounded by trees. No people."

The four illustrations were made especially for this multimedia concert after the original instructions that Roussel had left after his death. Frank Zweers, responsible for the image direction, photographed them and divided each into eight equal rectangles. These 32 photo fragments were subsequently divided over four projection screens, creating a kind of block puzzle (see sketch of the set-up). Text, music and images changed independently of each other, without creating a definitive overview. Sometimes image, text and music fragments coincided, but the 'puzzle' was never solved. 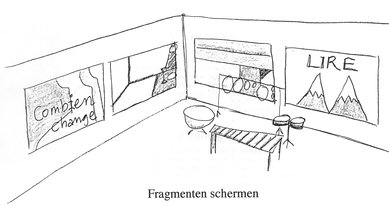