The music represents the 'delayed' observation of a musical sculpture.

Where, from a musical viewpoint, space and colour prevail, time and pitch come to a standstill.

Ellsworth Kelly once compared the effect of his paintings with 'birdstones'; they are concrete and at the same time magical and they have an aura of form, according to Kelly. He wishes his work, like birdstones, to have an 'eternal existence in the present'.

The musicians are seated on stage, the ensemble being divided into two groups. The fifteen musicians operate individually as well as in groups. There is no conductor. Within the given time limits, a fragment is to be repeated several times by each player individually, each time in a different tempo.

The music is built up in layers, each layer consisting of small groups of one to five players: from softly sparkling drones and blurring harmonies to rhythmically distinct passages and loud bursts of sound.The composition of these groups changes several times in the course of the piece.

The sound spectrum changes from homogeneous groups (string quartet, woodwinds, brass) seated far apart to heterogeneous groups spatially concentrated on one spot (e.g. clarinet, trumpet, piano, violin and cello at the lefthand side of the stage and oboe, harp, percussion and viola at the righthand side), without the musicians actually changing places.

This spatial conception brings to mind an association with birdstones - 'concrete and at the same time magical' -, with time as an added dimension. 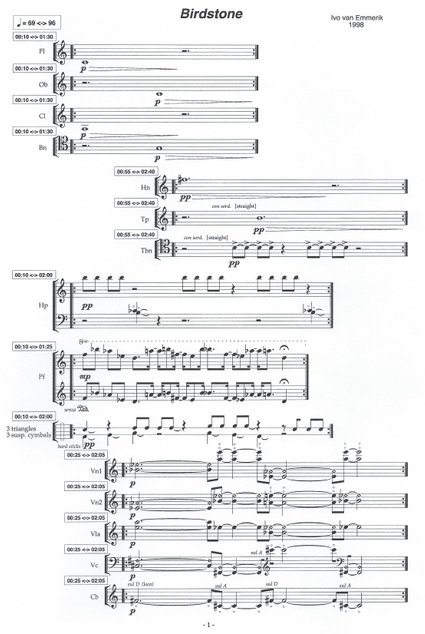 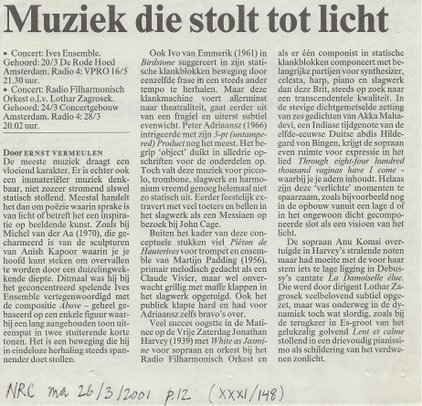 "In Birdstone, Van Emmerik suggests movement in his static sound blocks by repeating the same phrase in an ever changing tempo. But this sound machine is far from leading to theatricality, assumes rather an extremely fragile and delicate balance."

"Van Emmerik (...) always manages to create an authentic sound with own references."