FOR 4 PERCUSSIONISTS AND MUSIQUE CONCRÈTE

Like Cento (2001), Chinese Whispers (2002), Sestina (2010) and Beautiful Outlaw 2 (2019), Elementary Morality belongs to a series of works based on poetic forms or word games. In this case, the subject is a poetic form invented by Raymond Queneau, ‘morale élémentaire’, consisting exclusively of pairs of words composed of a noun and an adjective or participle.

According to Jacques Roubaud this is the primordial form of poetry: an adjective modifying a noun. In my endeavour to write musical poetry, all elements of this composition are ordered in pairs as well: percussionists I and II are occasionally being assisted by percussionists III and IV; in addition to instrumental sounds, this composition includes musique concrète:  sounds from reality (doors are being opened or closed, someone is walking in a city,  in a church or in the snow, one can hear someone breathing), as if modifying the ‘abstract’ sounds of the percussion.

The question arises whether the sounds from reality are a comment on the music or the other way round. Each element’s function in this composition is basically undecided and therefore unstable. Consequently, the musicians repeat short fragments in variable tempi without synchronization and the musique concrète acts as life itself: unpredictable.

In principle, the percussion instruments used are arranged according to material: metal, wood or instruments involving the use of air (one blows the kazoo and revolves a plastic tube, producing overtones). In an intermezzo, placed — as in Queneaus poems — at about two-third of the piece, the drum kit (snare drum, hi-hat and bass drum) is being deconstructed. A varied recapitulation of the beginning concludes the piece.

Elementary Morality was commissioned by the Fund for the Creation of Music and written for the Percussion Group The Hague and is dedicated to Peter Adriaansz.

For 4 percussionists and musique concrète:

Detail from page 11 of the score 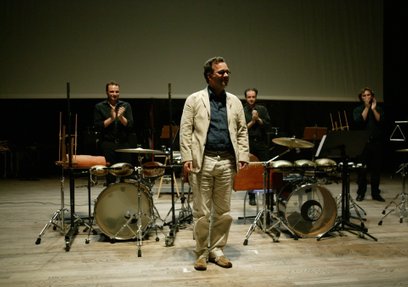