FOR THREE SOLOISTS AND ORCHESTRA

It is the writer's task, says Walter Benjamin, not to write more than he thinks. Because, he adds, writing is not just the expression, but also the realization of thinking.

This comment is a description of the strategic principle of my composition: finding the most accurate formulation of the musical events led to forms of unconventional notation that sometimes remind of the technique of Renaissance riddle or proportion canons. Here too, a form of notation is used in which the score only gives instructions for arriving at a performance, without the result being immediately readable.

Thought is made up of two layers, one of which is based on shifting repeating patterns, while the other is written in a more fluid, freely proceeding style. However contradictory these two elements may seem, they never stand alone, but always complement each other and therefore always act simultaneously.

“Starting point: there are two forces for the composer:

the formal, the tendency to organize, the strict

and the informal, the unexpected or unpredictable, the flexibility

a form had to be found to express this

Both forces are placed opposite each other in this piece

the formal: in the form of a kind of orchestral machine (not the image of it, but in construction - as cogwheels in a mechanism)

the informal: in the form of soft notes to be freely placed in time, which should sound as if they were invented on the spot

Nothing changes to this basic idea in the course of the piece, only the relationship between these forces is gradually reversed - more and more members of the orchestra get to play 'informal' music ...”

Alternation or dialectical oppositions thus make way for transparency and differentiation. In the course of the composition, more and more members of the orchestra, encouraged by the soloists, gradually give up their initially strongly mechanical movements, to join the other group, the one expressing themselves in a more individual way.

Thought (second state) (1991), derived from Thought, is a work in which the solo parts for bass flute, bass clarinet and piano were turned into an independently performable composition to celebrate the tenth anniversary of Het Trio. The original text was largely maintained, but by changing the order of the components, a different context was created, putting the music in a different light. In the piano part newly added chords sound, which could be seen as echoes of the orchestral part. The notation of this work allows for freedom in performance, within clearly defined limits, of duration, dynamics and timbre.

In 2007, a third version was created at the request of the German Ensemble Hörsinn entitled Box and shadow (after a painting by Philip Guston) by adding extra parts for percussion, violoncello and tuba to the existing trio version.

scored for 3 soloists and orchestra:

3 clarinets in B ﬂat 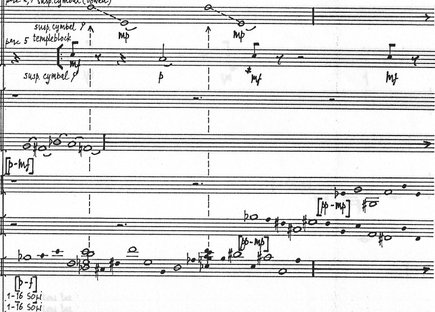 Fragment of the score

"Van Emmerik makes no attempt to make the rotating and shifting sound layers in Thought look more than what they are: part of a sublime game. (...) Van Emmerik invites the listener to follow the machine-winding process and realizes the necessary transparency at first by incorporating a lot of rest. Later the sound layers silt up again, partly due to the two-part clarinets, flutes and piccolos."

"(...) the mechanical kla-boom in the orchestra was continually eaten away by free material from the trio of soloists (...), and increasingly disrupted by abrasive repetitions. Van Emmerik was therefore the most experimental of the three composers on the program." 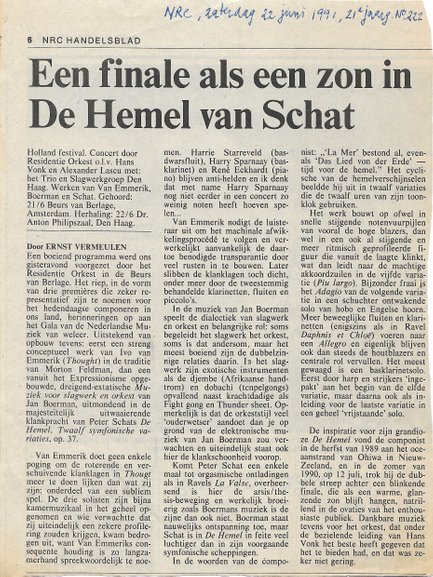 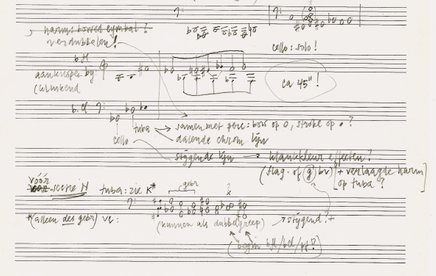