A SERIES OF WORKS BASED ON 'INVISIBLE CITIES'

Since 2008, a number of works have been created which, through their title, are linked to Italo Calvino's Invisible Cities, the 1972 classic novel about the powerful emperor Kublai Khan and the famous explorer Marco Polo describing the cities he has visited. These cities are, in fact, imaginary places in which a certain aspect of life emerges, giving those descriptions the character of philosophical speculations.

The first work in this series around Calvino is the piano piece Ersilia (2008), in which five different 'themes' in a kind of kaleidoscopic alternation develop and are constantly linked to each other in different ways. These themes do not have a solid form and change color repeatedly. "... spider webs of intricate relationships seeking a form" is how Calvino describes the dynamics of this invisible city. The listeners, like the residents of Ersilia, can discover the proportions in the braid of forms and textures with which this composition is built. Just like the story, it seems to be an exercise in making: creating, breaking down and remembering, searching for the right form again.

Cloe (2012) is (like Ersilia) a city of 'exchanges'. In this city, people’s glances intersect without exchanging a word and volatile, imaginary encounters take place between people who do not know each other. Cloe is not an oboe concerto in the sense of a virtuoso soloist in competition with a collective. The role of the oboe is rather one of initiator and leader, a virtual conductor of imaginary encounters in "an exchange of glances". The instruments on stage are arranged in pairs: flute and clarinet, soprano saxophone and bassoon, trumpet and trombone, horn and cello. Only the oboe operates in a relatively independent way, being the only one not accompanied by a melody instrument (but non-pitched percussion). Initially faithful to each other’s partner, there will soon be a jumble of connections with the other instruments.

In the course of the orchestra piece Zaira (2013), named after a "city of memory", the listeners become aware of a cyclic pattern of related passages: recurring melodic sections, slowly covered with multi-voice structures; pliable chords that, in a continuously fluctuating tempo, mould the perception of time; stately, almost ritual chord collisions accompanied by gongs and drums; solo passages of wind instruments hanging from extremely fine strands of violin sounds and finally short interruptions by piccolo and contrabassoon in the extreme regions of the sound space. All of these sound characters change almost imperceptibly over time. The listeners become aware of this at the last moment, when the final notes of the piece remind them of the beginning.

Even though this work considerably differs from Ersilia, it is still immersed in melodic and harmonious memories of this piano piece. However, it remains an imperfect memory that nevertheless preserves the past because it "... does not tell its past, but contains it like the lines of a hand."

In Calvino's novel, Argia is a gloomy underground city that has "earth instead of air" and the author asks whether "the inhabitants can move about the city, widening the worm tunnels". By fusing Ersilia and Zaira into one in Argia (2014-2017), a dense network of musical connections developes, in which, thanks to the harmonious web that was spun, there is still enough space to find a path as a listener.

Argia thus carries the characteristics of its 'intermediate stations' Ersilia and Zaira - the search for the right form, the memory game - and deepens it, making it a kind of 'sound city' with busy streets, dark alleys, picturesque squares and parks.

Other works from this series include Moriana (2016), a piano concerto in which the soloist and ensemble relate to each other as "a sheet of paper, with a figure on either side, which can neither be separated nor look at each other."

Ottavia (2017) for piccolo and percussion, representing a "spiderweb city" in which there is a subtle tension in the balance between the weight of the imaginary city and its hanging position between two steep mountains: "Below there is nothing for hundreds and hundreds of feet: a few clouds glide past; farther down you can glimpse the chasm’s bed."

The last piece in the series, Isidora, is the only one with text and is about the dream city that the traveler longs for while traveling, but which ultimately only exists in the memory. "Desires are already memories." 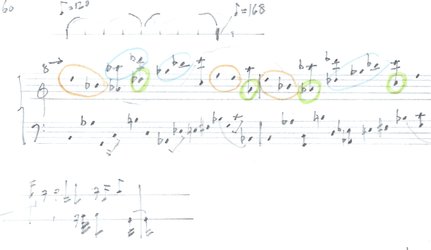 Works in the series:

scored for oboe and ensemble:

scored for orchestra with piano:

scored for piano and ensemble

scored for piccolo and percussion