This composition consists of six movements, each named after a color from the spectrum. These titles are less descriptive than metaphorical. The first and longest movement, Rouge, contains references to earlier work of mine, the movement in its turn acting as a source of material for the subsequent movements. In this way, a large number of musical cross references emerges, serving to show—perhaps without being heard instantly—somewhat ironically the relationship between music and reality.

Rouge is not only the longest movement, it also has the largest instrumentation and the most complex structure of the cycle. To a certain extent this structure resembles that of Raymond Roussel’s Documents pour servir de canevas (Documents to serve as canvas—after which text, my composition obviously was named). Like Roussel’s text, which consists of frame stories and incidentally also has six parts, the score does not follow a chronological path but divides into four levels, four frame stories, so to speak. Beyond that, each instrumental part has its own structure of repeats and durations, as a consequence of which each player jumps from one level to the next at a different point in time. The musicians follow their own path through a labyrinth of repeats and references. Since each instrument operates independently, it is impossible to verify whether the parts synchronize or not. The audible result can only being spoken of in approximative terms.

The score of Orange knows repeats, too, but here they are the same for all instruments, according to the tendency of the cycle towards simplification. Each page (at the same time being a system) is repeated in a similar fashion: at the level of a system as a whole and at the level of a segment therein. The hypnotic effect of this spiral-like form is intensified by the continuous reiteration of the pitch g’ and its microtonal alterations, alternating with  dense chords or extremely high and low registers.

The third movement of the cycle, devoted to the brightest color of the spectrum, has several ‘light’ characteristics: only three instruments and only upper ranges are used. Moreover, the voice exchange between oboe and violin often gives their melodies a transparant character. The number of repeats gradually diminishes as the fragments to be repeated increase in time. As a result, the repetitive structure at the end of the movement has disappeared altogether.

This movement is constructed as a system of simultaneous pulses, the tempos of which are different for each of the six participating instruments, each tempo remaining constant throughout the movement. The pulsation is not always audible: sometimes sounds are sustained, sometimes pulses are expressed by rests. The flute has the fastest ictus, as a result of which the impression arises of a solo with accompaniment. As far as timbre is concerned this is the most ‘saturated’ movement, in accordance with the color to which this movement is devoted. Repetitions occur at irregular moments in order to underline or to change certain sound combinations.

Bleu is the first movement of the cycle that is not carried by a framework of repetitions. That is why the musical material, the simplicity  (diatonicism, fifths) of which  symbolizes clarity, is able to float freely in the musical continuity. This was emphasized during the composition process by composing each of the six pages as an independent unit, only to put them in order afterwards.

The last movement of Documents pour servir de canevas is the shortest, yet it has the largest instrumentation but one. On a ‘canvas’ of piano and percussion sounds (derived from the first movement) harsh chords in the winds and strings stand out, leading to a new element, namely microtones. At the end of the spectrum, it seems, a window is opened to a new world. 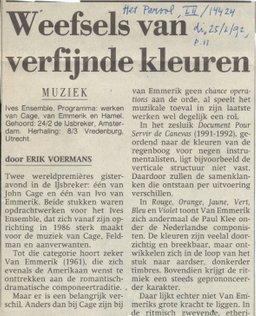 "Emmerik once again shows himself to be the Paul Klee under the Dutch composers. The colors are mostly transparent and brittle, but evolve over the course of the piece to earthy, darker timbres. In addition, the rhythm is becoming more and more pronounced in character.

(...) his sophisticated sound tissues that merge into one another are best appreciated in the rhythmic floating, ethereal first parts."

"I liked Orange best, with its sparse, gliding unison sounds of trombone, viola and bass clarinet, occasionally hunted by a sharp accent in the piccolo (...)"