The poem that Antoine de Kom wrote for this work tries "to capture Mozart for a moment in his elusive versatility as a negation of himself. It shows him as a traveler who encounters the unexpected and alien, touching politics unintentionally, while there is a reversal of power relations, something that Mozart so much loved. He also enjoys the privilege of a ritual bath, which allows the Freemason to free himself from his worries."

The music, in turn, aims to support the text and provide context with understated connections. For example, there are references to the fantasy, the recitative and at the end an instrumental reference to the coloratura from the aria of the Queen of the Night from "Die Zauberflöte", the opera that also is alluded to in the text. 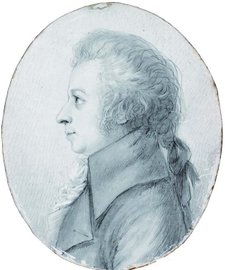 The musical material of the work is entirely based on motifs derived from "Die Zauberflöte": the repeating notes, the turning motif, the descending tone sequences and especially the melodic and harmonic structure based on the interval of a fourth have been derived from that score, without allude to Mozart or 18th century music.

The composition was originally commissioned by the Fund for the Creation of Music for Francine van der Heijden and Dirk Luijmes to celebrate Mozart's 250th birthday. Then the title was amadé. The orchestral version was created in 2008, revised in 2022 and is called - because of the perspective created by the instrumental colors - temple. 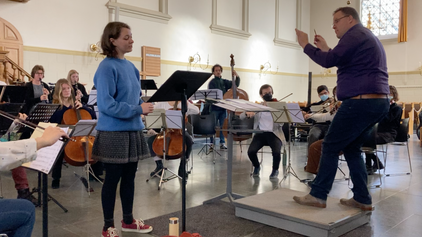 For soprano and fortepiano