The title of this work is borrowed from a watercolour by Paul Klee from 1923. At that time, partly due to his appointment as a teacher at the Bauhaus in Weimar, the painter was much concerned with the significance of architecture for the form structures of his own paintings and drawings.

According to Klee, a painter should arrive at a state of perfect equilibrium by carefully weighing up the formal elements, in order to increase the "carrying capacity" of his work.

In his Architektur der Ebene various transparent areas of color are superimposed on each other to create a subtle, rhythmically changing spectrum; this is designed with such lucidity that it seems as if we can still see the hand of the painter moving across the paper, the traces of the compositional strategy remain visible on the surface.

In a similar way, my Architektur der Ebene forms an imaginary account of the process of its making: thirteen short fragments show aspects of the same basic material, contained in small, rounded, often symmetrical structures. The discontinuous course of the work makes it possible to illuminate more sides and the material can, as it were, swerve to places where it otherwise would not have come.

sketch for the descending piano scales

“Of the three Dutch pieces, 'Architektur der Ebene' by Ivo van Emmerik (b. 1961) turned out to be the most interesting and the strongest. The small piano solos that connect the short parts subtly give the impression that they contribute to the changes in mood and timbre of the piece. And although it involves spreading different sand patterns each time, the impression of a building is still created. "Architektur der Ebene" is a blueprint: monochrome, but finely worked out and in the details always surprising. "

“The most special thing is the use of the two pianos, which go their own way completely separate from the orchestra. Melodies slowly descend, like a watery brush stroke. This connecting element takes on a life of its own: gently tinkling like an atonal music box descending from far behind the orchestra. Thát is composing! ” 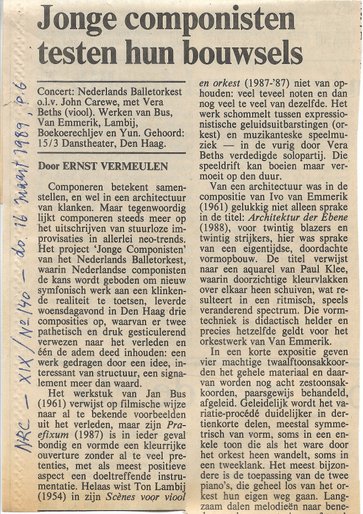