In his introduction to his anthology School of Poetry (W. Versluys, Amsterdam) Herman Gorter wondered in 1897 whether there is not another way. A road leading to the understanding of the world around us, to find what moves us and what makes the world around us move.

The Moorish philosopher Averroes, who lived from 1126 to 1198, once wrote a book that had to destroy another book, that of Ghazali. The book of Ghazali was called Tahafut al-falasifa and that religious book was intended to destroy the philosophers. Averroes wrote his Tahafut al-tahafut as a destruction of such destruction, as confusion of that confusion.

Gloeiend groener nog is a poem that confuses and destroys itself and is confused and destroyed in the music. This squaring of confusing destruction is a small world that keeps destroying itself, and continues moving like that and stirringly touches us.

On Tahafut al-tahafut (which means 'confusion of confusion'): this work is a radio play based on a poem by antoine de kom, called Gloeiend groener nog. The poem (read by the author) was digitally transformed and combined with a "virtual" orchestra of strings, winds, piano and percussion. New meanings of the text emerge in the music, in which words, phrases and fragments of sentences spin around and overtake themselves, so that music and language merge.

The work has two parts of each approximately 22 minutes and unfolds slowly; in the first part mainly string harmonies occur next to the voice,

the second part starts with a long introduction of slow flute melodies and resonant piano sounds. At the end of the piece, when the text speaks of “smoldering grass” all sounds are "incinerated" by fire and drowned out by noise.

You can read the text of this radioplay, the poem Gloeiend groener nog ( in Dutch) at the website of the Koninklijke Bibliotheek (Royal Library The Hague): 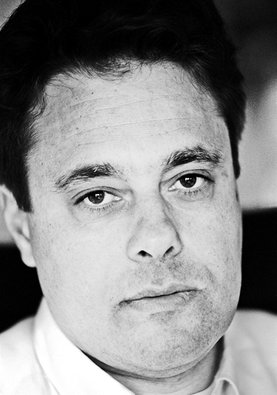